You may be surprised to learn that in a crime-ridden future awash in bloodshed that amid wall-piercing railguns, headhunting smart-bullets, and thermal assassin blades sheathed in the flesh of your own forearm, that swords remain one of the best ways to untether people from that pesky mortal coil. Indeed, not only are melee weapons — katanas in particular — so viable, many have been quick to point out that they can be flat-out broken when built for appropriately. 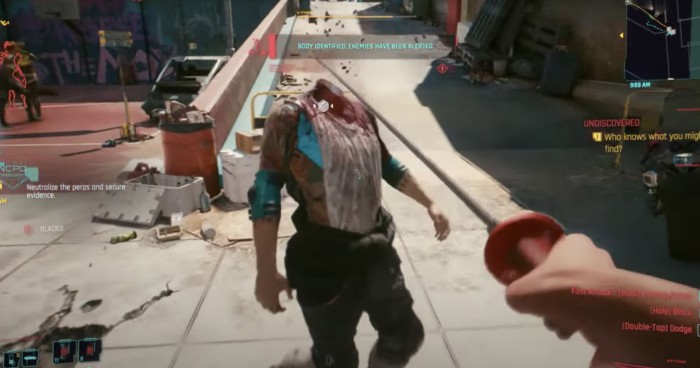 There are a lot of Katana Builds for Cyberpunk 2077. Some intermix stealth with a mix of Cool and Reflexes, others opt for a Netrunner-Swordsman type hybrid, but for this build we’re going for the most straightforward, high-damage and high-survivability bruiser build. This is the closest Cyberpunk 2077 build you’ll find to a classic warrior archetype from a traditional RPG — it hits like a truck and happens to be as durable as one too.

This build provides ridiculous burst damage by stacking bonuses on top of the Jinchu-Maru/Kerenzikov combo guarantees 100% crit-rate during time dilation, and providing tankiness that makes you impossible to one-shot with a large health pool, damage reduction, and high HP-regen. This build thrives on bursting down enemies almost instantly, rather than making use of the Bleed perk tree.

Mantis Blades are an optional addition to provide a potent gap-closer and an opportunity to add more mods, but aren’t 100% necessary and should be the last on your Cyberware shopping list due to their somewhat ridiculous price-tag. The Dagger Dealer perk is another potent (but supplementary) addition to the build for a ranged option that scales with your pure melee setup. 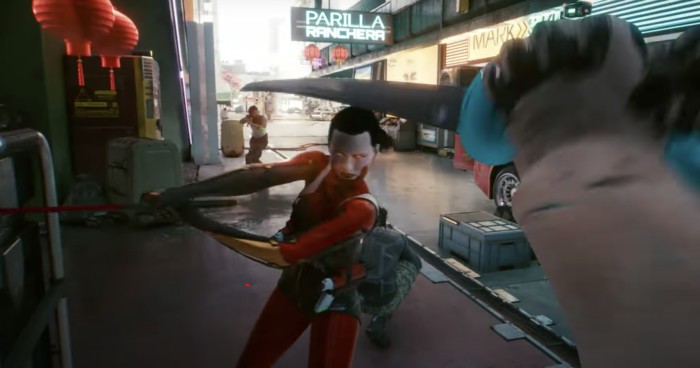 The Jinchu-Maru iconic Katana is one beast of a sword, dealing a whopping amount of straight DPS through base damage/ridiculous attack speed alone, but becomes especially medieval when paired with Kerenzikov; While the latter’s time-slow effect is active, crit-chance is upped to 100%, giving you a free meal on your opponent’s credit card. On top of that invaluable active effect, Jinchu-Maru also deals double damage at the end of its combo and deals double damage to opponents with twice your current health. Though it’s unclear if the latter is calculated according to percentage or flat-numbers, the Jinchu-Maru nonetheless rains oblivion itself down opponents through the ridiculous burst. 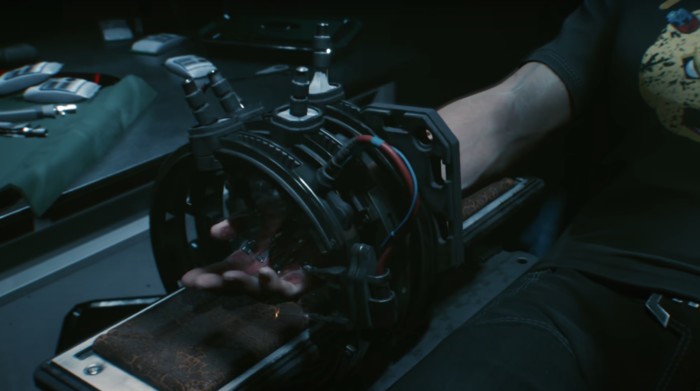 The total cost of the Cyberware build ranges from $61,500 to $163,000 without Mantis Blades or mods and focuses on rounding out the damage obtained through your perks with added survivability.

Heal on Kill synergizes beautifully with the Death Bloom Perk, giving you a grand total of 30% of your max HP upon kill.

Pain Editor reduces all incoming damage by a flat 10% — easy to see the utility there.

Increases all Resistances by 8-35%. While Pain Editor, Subdermal Armor and Synaptic Signal Optimizer give you plenty of tankiness, Cataresist rounds out your durability by giving you across the board resistances.

Kerenzikov is absolutely mandatory for this Katana build (and most solid builds, generally-speaking) for its synergy with Jinchu-Maru.

Nanorelays is part-and-parcel with the Jinchu-Maru/Kerenzikov combo, by extending Kerenzikov’s (and any Sandevistan’s) time-dilation effect by 1 full second. That might not sound like much, but with Jinchu-Maru’s attack speed that’s five more attacks at 100% crit. Not to mention a double-damage

Rather than selecting against any specific, Subdermal Armor adds 200 armor at Legendary rarity, adding some tankiness for those who still feel a little too squishy to rush groups of people aiming railguns at your body.

With all of the tankiness you’re already sporting with Subdermal Armor and your health regen, a fat pool of health is the final nail in the coffin of anyone’s hope of bursting you down. The Synaptic Signal Optimizer ensures you can absorb whatever’s thrown at you between the huge heals Death Bolt gives you every kill.

Bionic Lungs will solve most of your stamina issues itself and is, comparatively, extremely cheap for a top-tier upgrade.

Mantis Blades receive all of the bonuses you build in the Blades tree, scale directly with Reflex attribute points, and provide an invaluable gap-closer to begin your rampage with. 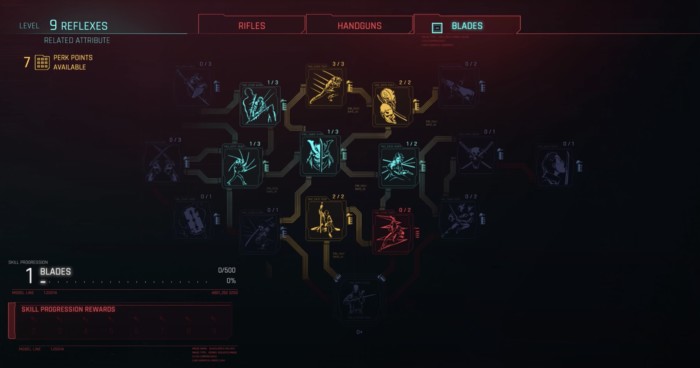 Below are the perks considered foundational for the Samurai Slaughterhouse katana build. Aside from those laid out below, there’s plenty of others that can be added after the fact or along the way with the rest of the perk points you obtain for each skill tree. That said, these perks are the most important in developing a holistic synergy for your character.

Your total perk count for the basis of this katana build is 26, with 13 in Reflexes and 13 in body. Additionally, players may want to consider investing a few attribute points into Cool in order to obtain the Assassin and Dagger Dealer perks.

All else aside, Roaring Waters is the meat of this build’s damage. With 3 points, it boosts the damage of heavy katana attacks by 50%. Rather than emphasizing bleeds, the burst damage that comes from guaranteed crits with Kerenzikov/Jinchu-Maru becomes absolutely immense when combined with the huge base damage from Roaring Waters-enhanced heavy attacks.

Blessed Blade is worth the single perk point it takes for the 20% crit-chance it endows your attacks when not dilating time with Kerenzikov.

Slow and Steady gives you a 30% armor boost while moving — a critical component of any Katana-main build — that helps you survive the trip between individual enemies as you cut each one down.

Shifting Sands restores 30% of your stamina upon dodging (with a 2-second cooldown) which should, for the most part, take care of any Stamina issues you have in conjunction with Bionic Lungs.

Judge, Jury and Executioner doubles your damage against enemies with max health. When wielding Jinchu-Maru, if that enemy is unfortunate enough to have twice your own health or more, that damage gets doubled again — meaning quadruple damage. On top of all that, you get a 50% damage boost from Roaring Waters and a guaranteed crit. That’s enough damage to put a dent in time itself

Deathbolt is one of the more critical perks for this katana build and the leap-off point where it becomes essentially broken. Deathbolt restores 20% HP on kill and buffs movement speed by 30% for 5 seconds, keeping you juiced up as you dart from opponent to opponent like the world’s most high-stakes game of checkers.

The Jinchu-Maru/Kerenzikov combo lets you squeeze all the juice you can out of Dragon Strike’s enormous boost to Crit Damage. A single perk point spent on Dragon Strike increases the damage of your guaranteed hits by 25% + 2% per perk level.

Regeneration, unsurprisingly, gives you in-combat health regen that can save your life with a precious few hit points when you get face-blasted with a shotgun and need to run for cover to pop that Max-doc.

Invincible gives you 30% more max HP that will come in handy for any barbarian looking to mow down people armed with firearms using a samurai sword.

Steel and Chrome simply ups your melee damage by a flat 20% — inarguably necessary for any build running melee weapons.

With Cardio Cure, your health regen gets a 25% boost while moving. This helps make Regeneration slightly move viable.

Marathoner negates the stamina cost of sprinting, letting you save it all for chopping down opponents and is absolutely critical to make sure you can: a) always run for cover if the scrap-metal hits the fan and b) you always have enough stamina to dish out those power attacks.

With Wolverine, your health-regen initiates 90% faster.

Indestructible gives you a 10% flat damage reduction, coinciding with Pain Editor to make sure whatever does hit you is reduced by a flat 20% after being filtered through armor and resistances.