Cyberpunk 2077 on the Chromecast Ultra firmly blew our expectations out of the water. Early reviews of the Stadia when the platform first launched suggested that gameplay tended to be smoother playing through Chrome on a PC, but it seems Google and CDPR had good reason to push as hard as they did to get people on the Stadia via Chromecast. Players who pre-ordered the game were given the chance to opt-in for a free Stadia Premiere Kit which included both a Stadia Controller and the titular Chromecast Ultra we’re here to review. 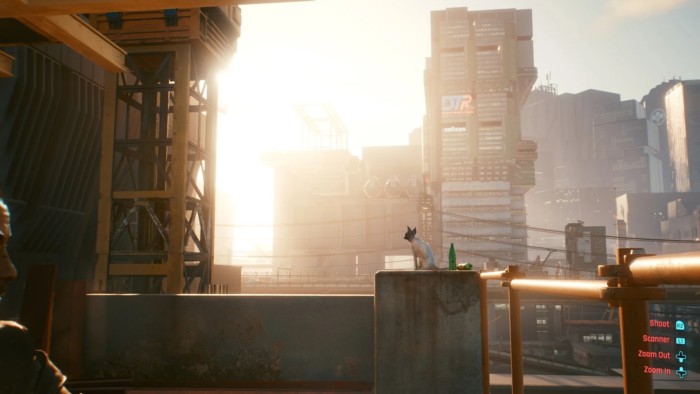 With a solid internet connection, we were blown away by the capabilities of the Chromecast Ultra, finding it vastly superior to Stadia on the PC and almost indistinguishable from local hardware.

The Chromecast Ultra vastly exceeded expectations and proved nigh-indistinguishable from Cyberpunk 2077 on the console or high-end PC.

Playing Cyberpunk 2077 on Stadia via Chromecast

We hooked up the Chromecast Ultra to a standard, non-smart TV and a 240 Mbps internet connection, and a 7-10 ping. Remember: You can use the Stadia controller to play on any screen that has Chrome or the Stadia app– iPads and phones included. For this review, however, we chose the big screen. We did not use an ethernet cable, and for the most part, minimized other loads on the network. All gameplay recorded was done using the Stadia controller.

Cyberpunk 2077’s graphics are noticeably better on the Chromecast compared to its Mouse/Keyboard counterpart. Though all Stadia games have their graphics locked on maximum settings, since you’re really only playing a literal video of the game being run at one of Google’s data centers, in our Stadia PC review we noted that there was a certain “fuzziness” to the resolution. Not so with the Chromecast.

The graphics on the Chromecast were crisp, and the frame rate didn’t drop once throughout the course of a 2+ hour gameplay. In terms of raw bang for your buck, if you already have a solid internet connection in place (and we mean solid) you can comfortably play Cyberpunk 2077 on Stadia Chromecast and forget that you’re not on a typical console with ease. It’s that smooth.

If you’re considering purchasing a Stadia and Chromecast Ultra, you can be confident that you won’t be getting a downgraded console experience. It’s the real deal. You just need to have the right internet package — no data cap or speed throttling and as fast a speed as possible.

While the Stadia was plagued by reports of arduous, incessant input lag that noticeably detracted from the experience, it seems the cloud gaming platform has come a long way in the year-and-some-change since it was released. Alongside the stellar graphics and butter-smooth frame rate, the performance was — for the most part — completely uninterrupted. For the most part. The only seeming letdown of the Chromecast Ultra were small bouts of input lag that were noticeably more severe than PC. These lasted only about 1 second and occurred only twice during our 2+ hours of playing Cyberpunk 2077 on the Stadia Chromecast Ultra.

A small price to pay if you otherwise don’t have access to a device capable of diving deep into Night City. That said, one of those hiccups actually got us flatlined when, while charging some Tyger Claws with a Katana, our V failed to swing her Katana for a full second and got blasted down with almost hilarious speed.

Otherwise, the Stadia controller was perfectly comfortable throughout our gameplay. Gameplay-wise, it’s a mixed bag when compared to the PC. The precision of a mouse and keyboard is certainly lost for gunfights, especially if you’re running an Assault V with headshot perks, but the greater sensitivity for movement and the ability to cycle quickly between targets in the scanner lent itself well to a stealth-Netrunner build — all par for the course with any console, and a feather in Stadia’s cap.

Cyberpunk 2077 on Stadia Chromecast Ultra is, put simply, stunning. Not only is the performance of the device shockingly smooth, but with the Stadia controller in hand the experience is almost inseparable from playing with real hardware in the form of a console or high-end PC. For those with a potato-laptop and no console, investing in a Stadia and Chromecast Ultra becomes an increasingly viable option. Experience-wise, with solid internet, it’s essentially the same. Throw in the fact that you can carry the Chromecast with you in your pocket and use the Stadia controller to play on any screen, and it becomes arguably superior — in some ways.

If you are playing Cyberpunk — or any other game. for that matter — on Stadia with the help of Chromecast, do let us know of your experience.