After your not-so-friendly conversation with the extremely amicable Placide, the Voodoo Boy giant sends you on your way to investigate the mysterious vehicle being protected by the animals over at the Grand Imperial Mall. Your journey will start out seemingly simple — get in, check out the van, get out — but will involve a ton of combat (or stealth), a major boss fight that concludes with a one-time opportunity to get richer than god through an eddies exploit, and a major narrative choice that will immensely impact the course of the next job, Transmission. Down below, we’ll walk you through your journey into the bones of the Grand Imperial Mall, give you some tips on how to fight Sasquatch, how to use the eddies exploit, and an overview of your narrative choice options. 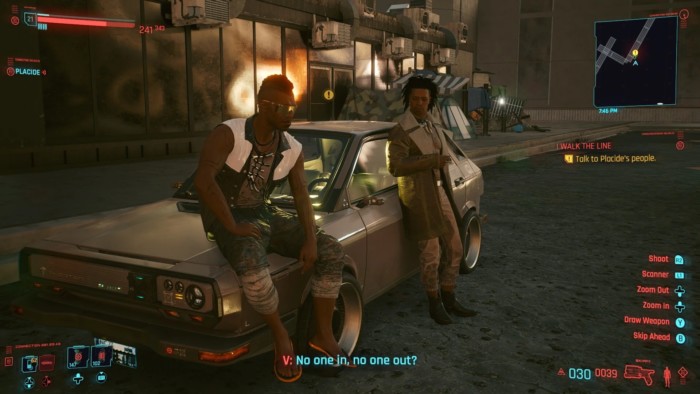 The first thing you’ll have to do is head about half a kilometer away to the parking lot of the Grand Imperial Mall. Aside from the quest marker, you’ll recognize it by the numerous car wrecks engulfed in flames and a general air of post-apocalyptic anarchy. Ah, Pacifica. You’ll find a pair of Voodoo Boys conspicuously hanging out on their car, staking out the mall in plain sight. Talk with them, get called a ghost by the smoker, and then head out for the mall itself. Take note of the gentle sounds of explosions and gunfire in the air.

Next up, get ready to start blasting. Or sneaking. However you want to approach it, there are some enemies coming up. Following the quest marker will lead you around the back to a side door to the mall where a trio of goons is hanging out. Watch out for the tech rifle one of them’s rocking. After taking them out, loot the goodies off them, and continue into the mall.

There are four enemies up ahead and a bunch of generic loot strewn about, so be sure to take a minute to scan around. Once you’ve cleaned up those three, head through the mall’s ratty side entrance to get inside the GIM proper.

Find the Van in the Lobby

As soon as you’re inside, Placide will instruct you to find the van. Be sure to snag the Max Doc on the wall before jumping up onto the upper level. The quest marker will guide you to the right, but if you go left first you can grab a white pickup and some ammo. Going straight will only lead you back to the outside, so turn around and continue following the quest marker deeper into the mall. 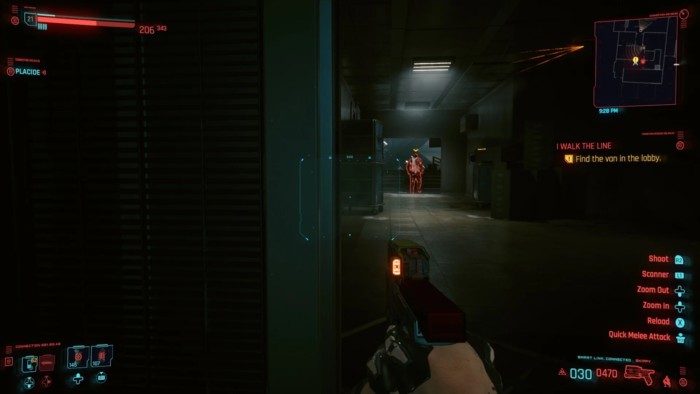 Beware that just on the other side of the next doorway is an Animals scout, as well as a camera that Placide will warn you about. You can disable the camera and wait for the scout to start strolling down the hallway to enter with stealth and try to pick people off one by one or, alternatively, throw caution to the wind and announce your presence with some deafening gunfire. Note that doing so will call numerous enemies down upon you — at least six. Three of those six are heavy melee types that will rush you, while the other three will try to snipe you from the other end of the hallway. Everybody here hits pretty hard. Make sure to loot any of the brawlers if you killed them in the previous room — as soon as you enter deeper into the hallway the door will shut behind you.

There is a door on your right that is stat-checked with 10 Body. Opening this is worth it — there’s an epic item and over 2000 eurodollars right on the other side. Turning right will lead you to a stairwell you can ascend to skip the next set of enemies awaiting you in the previous hallway (if you moved with stealth), as well as a locked door that you can breach. Aside from the green loot on the wall, there’s another green pistol in the shadows under the stairs. WARNING: There are a ton of enemies just outside the door upstairs, so get ready to blast if you choose that route. We recommend doubling back to clear out the rooms below of their own loot.

When entering the large room with the rundown boxing ring, approach with extreme caution. There are big guys with hard-hitting rifles that can seriously chunk huge amounts of health depending on your difficulty setting. There are four Max-Docs in this room, so be sure to grab them but note that, after the shutter on the right side of the room closes, many enemies will be triggered. Some of them have Tech weapons that sting so be careful. You can shoot them through the shutters with either a tech weapon or, at least in our case, Skippy. This will shave off a handful of the immense number of enemies lying in wait for you for the next combat sequence.

DO NOT MISS the Legendary Item Component in the boxing robot in the center of the dead boxing ring. Once you’re done killing the enemies on the ground floor around the boxing ring and possibly through the shutter, be sure to loot everything. There’s plenty of ammo and junk items to pick up before heading up the escalator. There are four max docs around the shelves near the top of the escalators. Once you’ve looted everything above and below, follow the quest marker through the door overhung by the “Tripple Extreme – Epic Workout Center” sign. 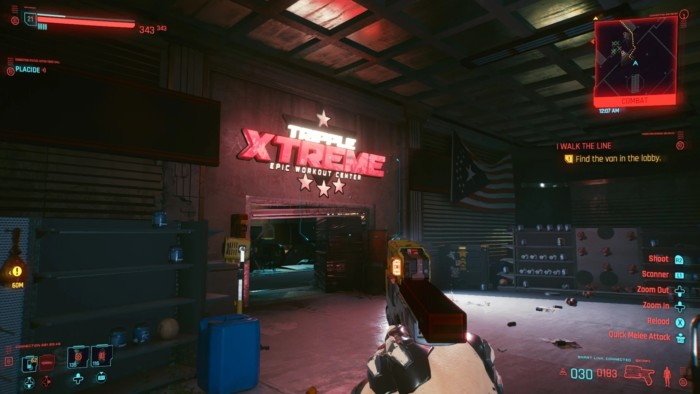 Oh, and get ready for a fight.

Inside the Main Atrium 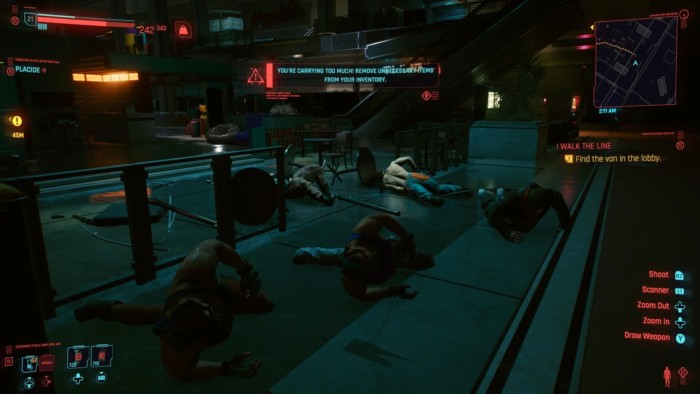 Make sure to bring your trigger-fingers, because it’s about to get messy. The main atrium is positively full of enemies (somewhere around 20!), coming from all directions. If you choose to go the guns-blazing route like we did, we suggest dipping in and out of the previous room to make good use of the cover, rather than wading deeper into the chaos.

After you’ve killed everyone in the front of the room, you can move towards the next half of the atrium by either descending the escalator or working your way along the upper level. Be wary of the security turret that’ll pop up and start harrying you with rockets. Once you’ve laid waste to the small army inside the atrium, start looting. It’s going to take a while. There is an absolute treasure trove of rare to generic loot all over the place, so make sure to scan each and every side room and chamber and level. It’s Max-Docs galore, which is always helpful.

Up next, depending on how you explore, you may actually run into the boss, Sasquatch, before proceeding to investigate the van. Just so you’re prepared, we’ll talk about Sasquatch first, who you can find on the second floor.

Once you’re done looting, following the quest marker will lead you to the boss of the whole operation: Sasquatch, beastly leader of this band of The Animals. The moment you see her, Placide will instantly seem on edge — and if Placide is on edge, it’s time to pay attention. Note that this would be a good time to save, especially if you’d like to take advantage of the glorious get-rich-quick exploit available here.

Now Sasquatch, or “Matilda K. Rose” is one hell of a heavy-hitter. She wields an immense hammer and employs a visually stunning hyper-speed gap closer that can be hard to deal with. Having some points in Body to eliminate any stamina issues would be strongly advised. Just try to keep moving and timing your dodges appropriately and you should be okay.

If you’re looking to cash in on the enormous amount of free eddies obtainable through the exploit available here, as soon as you’ve killed Sasquatch, loot her, collect the 30k eddies and XP reward, save, and then reload that save file. Sasquatch will be down, and she might look dead, but keep whacking her and suddenly she’ll die “again” and you’ll be reward again. Rinse, wash, repeat. Do this as many times as you want, because you won’t be able to do this again once you’ve moved on. 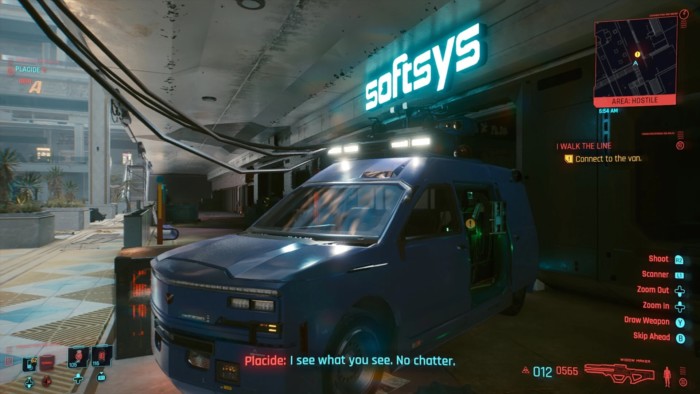 After you’ve killed everybody (possibly including Sasquatch), head over to the Van parked in the middle of the mall and jack in. Placide will pop up in your ear, explaining that it looks like the Netwatch is trying to disable the Voodoo Boys “Agwe” and essentially take control of the net. When the signal abruptly cuts, Placide sends you up to the cinema in search of this rogue netrunner.

This is where things get… weird.

Stroll past the detritus of your battle with Sasquatch (or, alternatively, kill Sasquatch) and up the stairs into the movie hall. Don’t be alarmed — the Netrunner is not whistling and strumming a guitar — that’s just the spaghetti western eerily playing in the background to nobody.

Following the quest marker up the stairs will finally lead you to the Netrunner behind all the insanity you’ve been through. He looks something like mid-level management in a Terminator factory and does his best to convince you that it’s in your own interest to listen to him. You can feel free to decide how you want to play the conversation — you can either take him down immediately or question him for answers. He’ll make some seemingly fishy claims about a virus in your system, telling you that the Voodoo Boys are planning to backstab you and that he’ll flush it out if you let him walk out with the data he’d obtained concerning the Voodoo Boys independent net, Reza Agwe.

I Walk the Line Choice

Here you have a choice. Side with the Voodoo Boys, take out the Netrunner, and quash all of his data or accept his offer, let him flush out the virus and walk away with what the Netwatch came for. WHATEVER YOU DO, DON’T MISS THE LEGENDARY MOD IN THE CASE BY THE NETRUNNER.

Siding with the Voodoo Boys

If you side with the Voodoo Boys, the moment you take out the Netrunner you’ll be incapacitated. It turns out the Netrunner was telling the truth; the Voodoo Boys just executed a virus that Placide must have planted on you during your meeting in Batty’s Hotel when he grabbed you by the arm and forced you to jack into the system. As soon as you’re awake, you’ll have a short exchange with Johnny and head out.

Meeting up with Placide later, you actually have the option to punch him in the face — which is always interesting. If you open with that, Placide’ll understandably ready himself to dice you up like the chicken from Rolland’s Butcher Shop, but Birgitte finally shows herself and reigns him in.

If you choose to accept the Netwatch agent’s offer, he’ll actually uphold his end of the bargain, flush the chip, and release Birgitte. You can meet with Placide and Birgitte and have a conversation about the biochip, and all seems well. This will feel like the better option — but know that you’ve just set yourself up for some more drama during Transmission, the next chapter.

And that’s it for the monster of a mission that was I Walk the Line. Hopefully, you got yourself some extra eddies, a legendary pickup, maybe a few levels and a ton of Street Cred. Stick with us for the next trip into pure mayhem in Transmission,