Beat on the Brat can be an annoying questline for those who prefer firearms and samurai swords over bare-knuckle boxing (metal knuckles or not). That said, it’s an interesting set of side jobs to run through, characters-wise, and serves as something like a bite-sized boxing film wrapped up in the Cyberpunk 2077 aesthetic. Down below we’ll run you through what is usually the third installment in the questline with our very own beat on the Brat: The Glen guide and break down exactly how to beat up El Cesar in front of his pregnant girlfriend. Yeah.

Beat on the Brat: Glen Guide

Getting to the Fight

We were in a hurry.

Following the quest marker will lead you to a small, seemingly nondescript alley that takes you to a literal back-alley basketball court full of children,a conspicuously golden six-wheeler car with a similarly gold-plated boxer currently getting yelled at by his extremely pregnant partner. It’s basically a metaphor for a Night City itself. 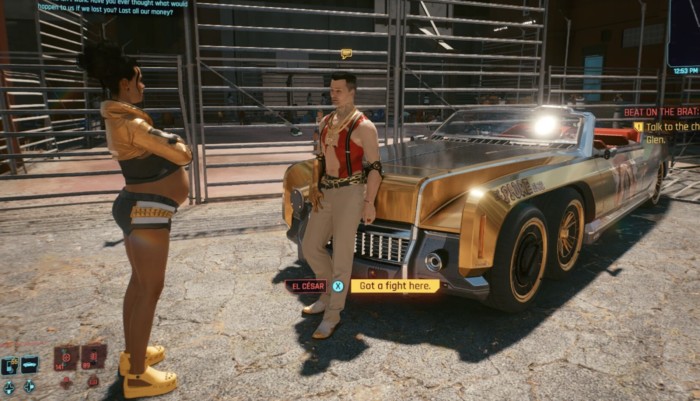 After the dialogue, in which El Cesar and his partner’s financial stress is quickly made clear, El Cesar — who otherwise seems like a nice guy, especially compared to Buck Reynolds — says he’s ready to fight. He’ll tell you he’s putting his beloved and highly reflective six-wheeler up for grabs, telling you it’ll be 4 grand to ante up. Later on, you’ll be able to decide whether you really want the car, the eddies, both, or neither — but first you gotta beat Cesar into the pavement. And that’s a lot harder than Buck or those ridiculous Twins.

Beat on the Brat: The Glen – Fight Tips & Tricks

At first, El Cesar can be quite a hassle. Not only can he KO you in only 3-4 hits, he’s durable as hell and has an evasion-blink attack that can catch you by surprise at first. The key is to, like with Buck, forget about blocking, focus on dodges, and make sure not to overextend in your openings.

Unlike Buck, don’t try to stun El Cesar as he’s charging you — he has his evasion/blink move that has him superman-punching you before you can hit him. Practice dodging — not too soon though. The post-blink window to get your punches in is short, and you will want to stay close enough that your camera stays locked on him. Dodge once, and just as he pops out of the air, sidestepping his attack and getting a combo in.

Like we said, you have but a few seconds to land your shots after El Cesar does his evasion/blink thing. Getting in 4-5 shots, or a short combo + power attack is plenty. After that, he’ll start swinging normal punches/kicks and those will murder you. It’s a rinse-wash-repeat formula. Dodge him, land conservatively, and move out. 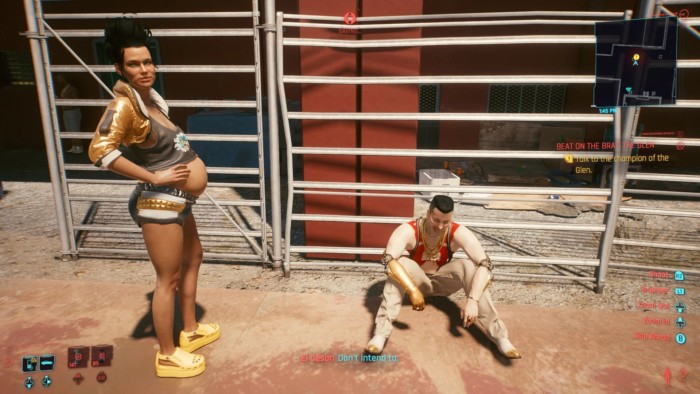 After you’ve dethroned El Cesar as Champion of the Glen, he’s gonna go catch a breather courtside while his partner comes and, somewhat justifiably, gives him a second beatdown — albeit verbal, a lot more brutal. Here you can choose whether you want the car, just the eddies, both, or, in an act of benevolence, none. Whatever you choose, it won’t affect your overall storyline. You’re free to choose, whether you want the resources or would prefer to roleplay as a merciful victor or brutal winner. In our opinion, the car is nothing great performance-wise.

Up next you’ll be fighting Rhino, champion of the Animals gang, in Beat on the Brat: Rancho Coronado. Stick with us and we’ll make sure you’ve got the chrome to keep the wins rolling.