After your trip through the virtus of Evelyn Parker following her rescue from the scavs, you’ll find yourself staring down a barrel named Pacifica, fully loaded with Voodoo Boys. But there won’t be any fighting, not just yet. This mission’s pure narrative, designed to set you up for the much more action-packed I Walk the Line quest next and introduce you to the people’s history of Pacifica. This mission is riddled with stat-checked dialogue options, ranging from 5 Body to 7 Cool and 12-15 Reflexes. 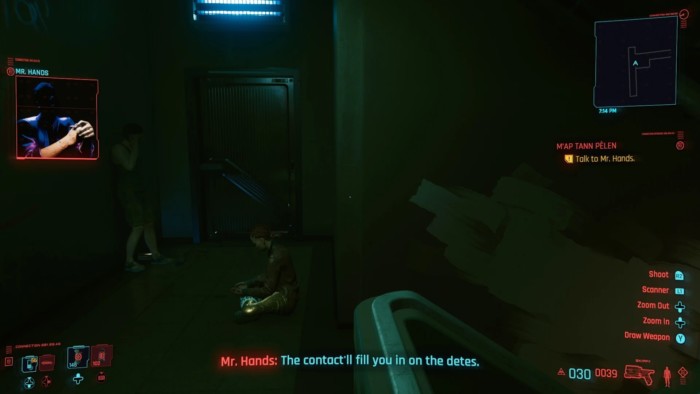 The first thing you’ll have to do is give good old Mr. Hands, Pacifica’s number one fixer, a call and ask him to set up a meeting with the boss of the Voodoo Boys. Hands tells you it’s probably going to be an exceptionally dangerous waste of time but you, being the central protagonist and all, has a different perspective on the matter and insists.

At this point Mr. Hands says he’ll call you back, leaving you free to pursue other leads. If you’re far enough in the game that this mission constitutes backtracking, you’ll only need to wait about a minute like we did. Otherwise, you can go do some other side jobs or just drive around, skipping time intermittently until Mr. Hands calls you back.

When he does, he’ll tell you he got you a job for the “VD-BS” — the closest thing you’ll get to a meeting with the lady in charge — and instructs you to head to a certain chapel in Pacifica.

Go to the Chapel

You’ll find the chapel just west of the huge Grand Imperial Mall, the monolithic steel carcass of Pacifica’s broken dreams. The church itself is just off the overpass and will have a small trio of Voodoo Boys right outside. Depending on the time of day you show up, it may be closed with a sign indicating that funeral preparations are going on. If so, lean on the railing to skip time until it opens at noon. 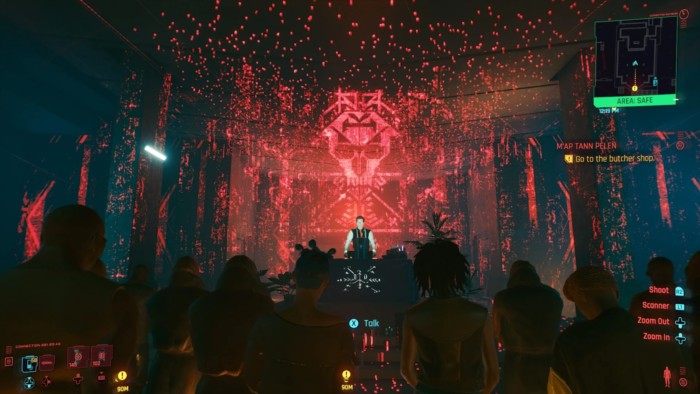 Stepping inside is a startling light display and, well, a crowded funeral. Clearly somebody important has died. Stepping closer, somebody taps you on the shoulder. A very red-eyed and strongly accented somebody, Alexandre Batisma, who informs you that your contact for the job will be at a local butcher shop. Press him for information as you might, he stays tight-lipped about the specifics of the funeral. 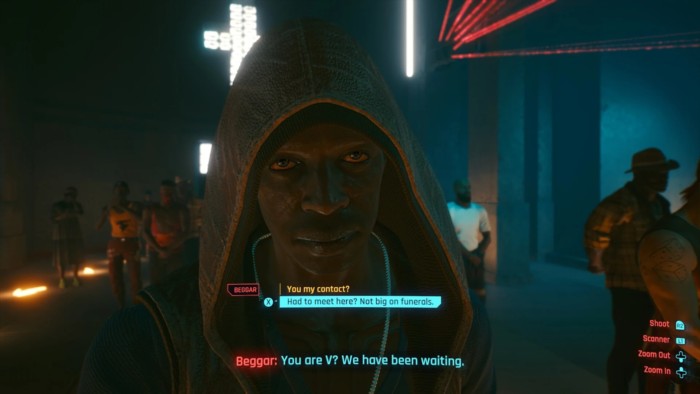 You can go ahead and exit the church immediately. There’s no way to get a closer look at the display nor is there any loot or extra details to be found there. Well, there is an automated penance machine you can pay six bucks to alleviate yourself of your every sin.

Go to the Butcher Shop

Follow the quest marker down to the Rolland butcher shop — it’s visible from the door of the Chapel. After a short dialogue and identity check, the Vendor will wave you into the back after you ask for Placide. There are some eurodollars and a shard on a table on the left side of the front room that you can grab before heading into the back. There’s another shard in the hallway where you have a relic malfunction. 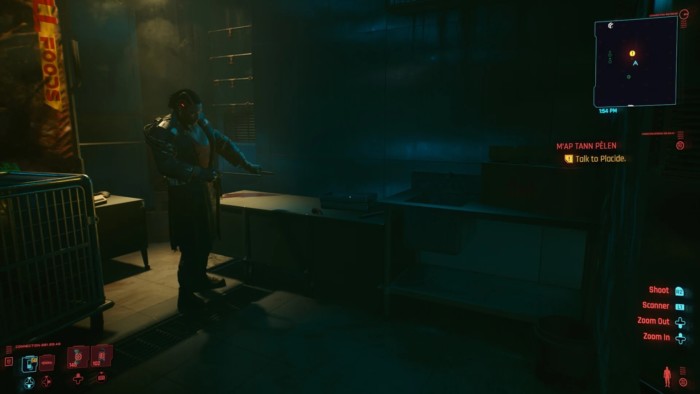 You’ll eventually find the mountain of a man that is Placide in the back, ominously sharpening a knife with a chicken on the butcher’s block. He’ll be pretty reserved about what he wants you to do at first but will take you on a mini-tour of Pacifica after a short exchange. Along the way, he’ll give you some background about how Pacifica devolved into the decrepit hellhole of a resort town that it is, eventually leading you to a small office in Batty’s Hotel.

Sitting down with Placide, you’ll learn a few things. First, that Placide isn’t the friendliest guy in the neighborhood. Second, The Animals are protecting something big for somebody big, and that Placide wants you to find out what. It’s a pretty intense exchange with several stat-checked dialogue options, ranging from 5 Body, 7 Cool, and up to 15 reflexes. So fans of the story who went for a more well-rounded build will get something of a narrative payday here. 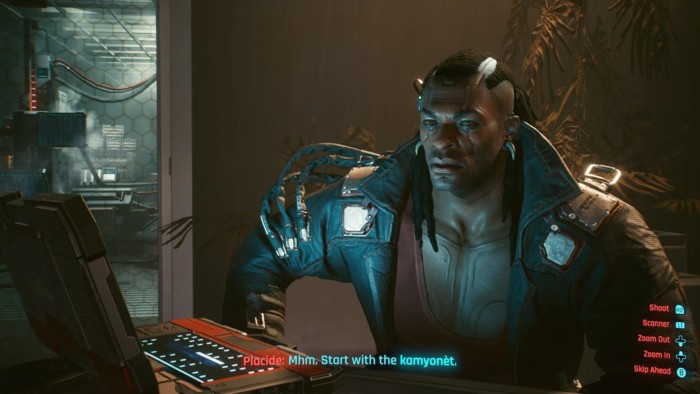 Before you leave, pick up the Bounce Back and the Shard to the right of Placide. To pick up the shard, you may need to jump onto the couch to get out of Placide’s dialogue range. There’s another shard in the back room through the sliding doors overhung with a green light.

And that’s it for M’ap Tann Pelen! Get ready to rock and roll for the next quest, I Walk the Line.