The eagerly awaited game of the decade has finally arrived. CD Projekt Red took their own sweet time to develop the dystopian world of Night City set in 2077. In Night City, players can explore the open-world gameplay where they will be spoilt with choices. Players take the role of V while figuring out the game world. Since the trailer came out years ago players have been waiting for Cyberpunk 2077 to be ready. Now that the game is out, it appears that not all gamers are able to enjoy this highly anticipated game.

A large number of people have complained about the seizure and migraine triggering visuals. Apart from the problematic visuals, it appears that the game is not accessible to all users. Those gamers with any form of disability that prevents them from using the conventional input options cannot play the game with virtual or voice inputs for now. For a game where disabled characters overcome their disabilities with Cyber parts, it has done nothing so far to address the issues being faced by gamers with disabilities.

Voices were raised on the CD Projekt Red forum by user siasia160 who pointed out that being a quadriplegic they could not use the default controls to play games, so they used a combination of virtual inputs to play other games. However, even after getting the hyped-up Cyberpunk 2077 game, they were unable to play it. They were able to use their Xbox controller but were unable to use their touchpad, touchscreen as well as the input emulator Joy2Key. 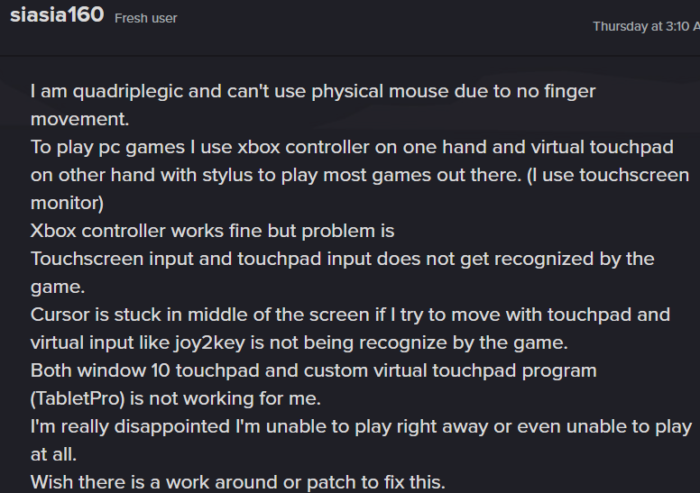 Soon other gamers also started adding to the thread pointing out that more keyboard and mouse emulators were not compatible with the game. Virtual input software like Autohotkey and MacroWorks did not work with Cyberpunk. The game does not offer voice control as well 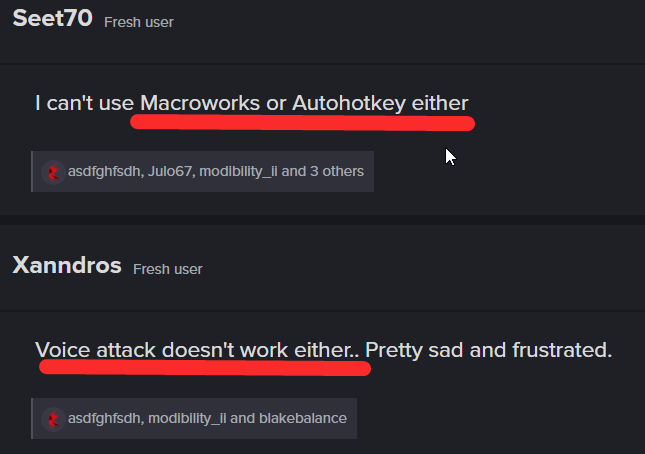 Some users suggested ways around that seem to work with other games. However, users confirmed that the workarounds like setting the Launch Options for Cyberpunk 2077 in Steam to “HardwareCursor” did not seem to work. There appears to be no simple workaround for disabled gamers currently. 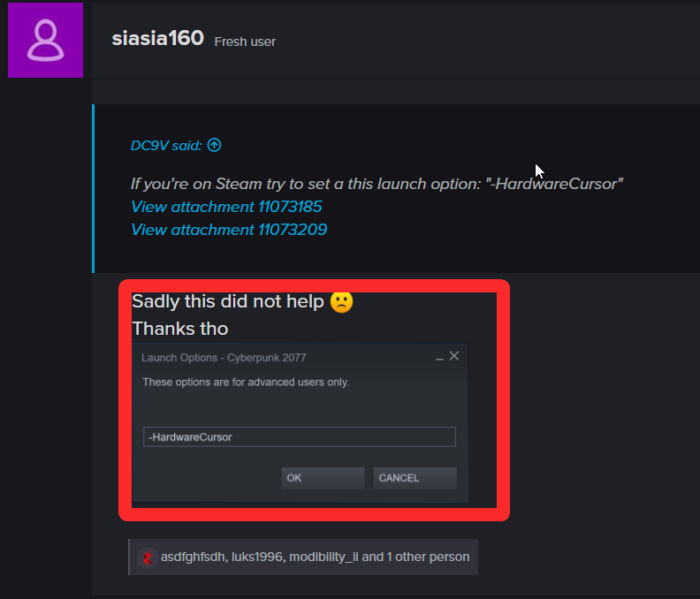 A number of users have already filed support tickets to get the attention of the game’s developers. The disheartened user who started the thread pointed out that moderators responded to other posts but their post went ignored.

Soon after buying the game, a few disappointed gamers were forced to return the game for a refund. While one user said that they could not even get a refund for the game that is inaccessible to them.

A large number of users responded to the post and bumped it till moderators took notice and pinned the post.

CD Projekt Red did not provide any kind of clarity on the controls of the game before the launch. Even during the launch, there was no mention of accessibility for disabled gamers who are now stuck with an unplayable game. 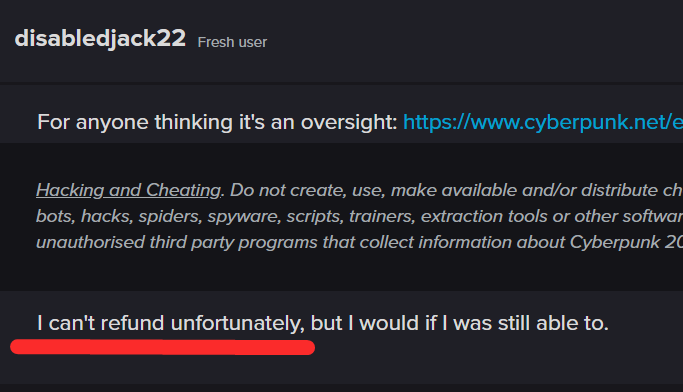 As of December 11, there has been no response from the developers regarding an update allowing virtual or voice input making the game more accessible to all gamers.

A visually impaired user shared their problem with the tiny text that they have to read in the absence of magnifying software. Cyberpunk 2077 disabled the use of the magnifying software that they were using. So, when trying to read anything apart from short dialogues the player has to tediously screenshot the image, magnify the screenshot, and read them. 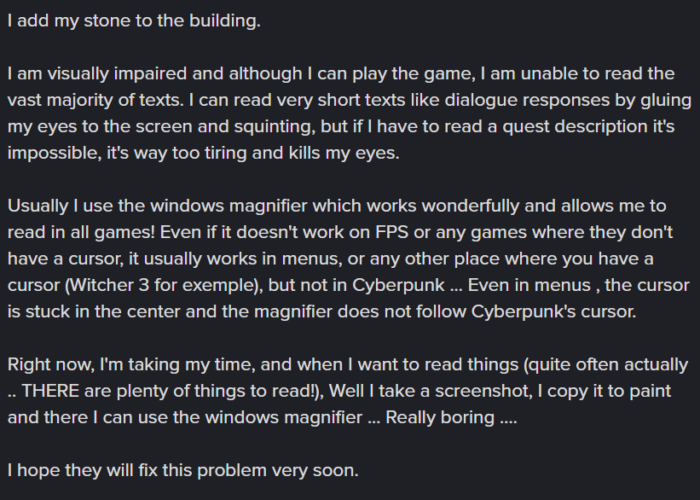 While loading Cyberpunk 2077 on your PC you can notice a seizure trigger warning at the beginning of the game. Epileptic seizures can occur due to flashing red and white lights. The visuals of Cyberpunk 2077 are problematic for those who are visually impaired, have migraines, or are epileptic. Throughout the game, players are bombarded with flashing lights and small text which are hard to read.

Taking to Twitter a number of users complained about suffering from seizures after playing the game.

They pointed out that the developers did not take enough steps to add seizure warnings and did nothing to make potential players aware of the triggers before the release. Players are having to play the game, risking serious seizures, to find out if they can play the game or not.

Invisible disabilities are real too. So I guess out of sheer paranoia I'm now going to have to wait to play Cyberpunk, because no-one at CDPR thought it'd be a good idea to have epilepsy accessibility testing in a game with hundreds of giant flashing billboards & VFX instances.

Adding to the problem of not being able to play the game they paid for, those gamers getting seizures from the game have been targeted by toxic fans of Cyberpunk 2077. One Twitter user claims that after voicing their concern they received files with seizure triggers disguised as support material.

The Gamers are trying to cause someone who has epilepsy to have a seizure because she dared criticize a video game. https://t.co/f6q4lzaD8O

While not all fans of the game have been kind to fellow gamers having a tough time, there has also been a limited response from CD Projekt Red. The developers have added the general trigger warning to the PC version of the game and have promised to further add seizure trigger warnings to make the game more accessible. The general warning has been a small step that could eventually see the option of switching off the flashing lights.

As many people are pointing out, this is just one step — hoping @CDPROJEKTRED adds some further accessibility options so players can turn off those flashing light effects completely.

There has however not been any word regarding more accessible controls that disabled users can reap the benefit of. Their voices may have been heard by the developers but there has not been any reassurance of any upcoming change.

Are you facing issues regarding the accessibility of the game? What do you think about the complaints? Share your opinion or show your support in the comments.