Halo Infinite is the new game in town that seems to be taking everyone by storm. The new version of this long-running franchise features open-world gameplay on a new expansive ring, the Zeta Halo ring or Installation 07.

If you too have been having a go at the campaign mode then you might have realized that you can carry over your awards and achievements to the multiplayer mode as well. A legendary award that seems to be garnering a lot of attention is the ‘Act of Genesis’ stance. So what is it, and how do you get it? Let’s find out.

What is the Act of Genesis stance? 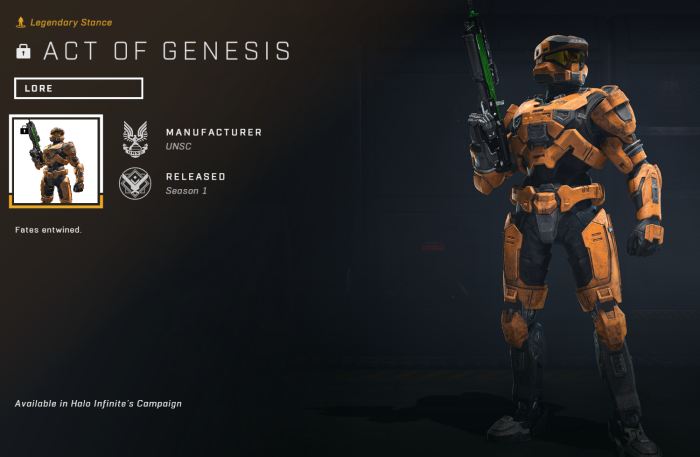 This stance can be changed from the ‘Customize’ menu and you can unlock new stances from the Shop, Campaign, or multiplayer mode as well. Here’s how you can get Act of Genesis in Halo Infinite and all we know about it.

How to get Act of Genesis stance in Halo Infinite

Unfortunately, you currently can not get the Act of Genesis stance in Halo Infinite and it is highly recommended that you don’t try to complete the campaign in LASO or just Legendary mode to get this achievement.

Halo Infinite’s campaign mode has been facing a recent bug where your awarded in-game cosmetics will disappear and fail to show up when you’re playing the game in offline mode. The achievements you unlock in offline mode and their awards will show up in your inventory later on, but you will still be unable to use them in multiplayer mode.

A fix is being currently worked on for the same and it should show up in the upcoming service update to the game, releasing tomorrow, ie: 14th, December 2021. You can find out more about the same by referring to the tweet from Brian Jarrard (Halo Community Director) below.

PSA: When playing #HaloInfinite campaign you will come across armor lockers that contain cosmetics for your MP Spartan. If you are offline, or disconnected from services – which can occur after Quick Resume – the cosmetics won’t show up in your MP inventory. (1/2)

The team is aware and we will eventually have a retroactive fix (you will get the cosmetics youve earned). For now, I recommend not continuing a Quick Resume session and making sure you’re online before venturing into Zeta Halo. Thank you! (2/2)

This achievement bug could be the reason why the ‘Act of Genesis’ stance, as well as the ‘Requiem Revengence’ stance, is still such a mystery. But other signs also point to the fact that these stances might simply still be undiscovered. Players around the world have completed every possible task, achievement, mode, and difficulty in the campaign mode in an attempt to find these stances to no avail. Here are all the things that have been tried so far that do not seem to unlock these stances.

Considering past Halo games, their rewards, and achievements, it is pretty safe to say that unlocking of these stances seems to be bugged. However, there are reports of hidden Armory lockers around the Zeta Halo map that are still undiscovered and the stances could be in one of these lockers.

There is also speculation around the fact that completing the Campaign in co-op mode will unlock the ‘Act of Genesis’ stance but this just speculation for now.

The Halo Achievements Bug: All you need to know

The Achievements bug is quite widespread and it is affecting both PC and Xbox users. If you’re playing the game in offline mode then your achievements will be unlocked the next time you connect to the internet. Additionally, you won’t be able to use the unlocked cosmetics while playing offline in multiplayer mode as they won’t show up in your multiplayer inventory.

The only workaround and fix for now seem to be to ensure that you are connected to the internet before playing the game and unlocking any rewards. Additionally, Xbox users are recommended to turn off Quick Resume for Halo Infinite as this causes the game to be disconnected from the servers. Resuming with Quick Resume enabled causes the game to be disconnected which in turn causes issues with the cosmetics and rewards you unlock.

This issue is expected to be fixed in the upcoming service update for Halo Infinite which will be released on the 14th of December, 2020. We recommend you update your game at the earliest to fix this issue.

We hope this post helped shed some light on how you can get the ‘Act of Genesis’ stance in Halo Infinite. If you have any more questions, feel free to drop them in the comments section below.